I’m doin it. I’m joining the river of stones. I’m getting my feet wet.

For the month of January, I am writing one small stone per day. This means paying attention long enough each day to record impressions of a fragment of my life. Presence. Stillness. Wonder. Tumble, play and roll down river.

I had hoped to add the 2012 badge here and link to the ‘writing our way home’ website in a tech savy smooth cool way, however that’s not going to happen. So for anyone interested in more info or joining in the fun – here is the link in longhand: http://www.writingourwayhome.com.

See you on (or in my case sometimes in) the river. A.

“Hasting’s Wife”
a long ago someone
with no other name

My family emigrated to “America” from the peasant class of southern Italy close to the heel of the boot. More importantly, they emigrated from the practical class as opposed to the artists/artisians. Once in “America” this practical side adapted to its new country. Fast forward to our generation – decendents of decendents of the Great Depression and World War Two sacrifices.

At our Christmas dinner (post Steve Jobs), talk turned to the ‘old days’.

“Remember when we went to Aunt Em’s for Thanksgiving? Do you remember the hostess gift we brought her?”

Undeterred my brother continued. “It was a case of canned tomatoes.” Vaguely, my sluggish memory started to kick in. “Yea, kinda.”

“We got them on sale – it was a case of twenty four ready-to-use twenty eight ounce canned Italian plum tomatoes”.

“Why did we do that? She could just as easily have bought them herself.”

“Yea, but we saved her the trouble of one trip. That was our real gift.”

And this was a considered gift appreciated far more than a work of art, flowers, candles or anything that she could or would not buy herself.

A gift of family. 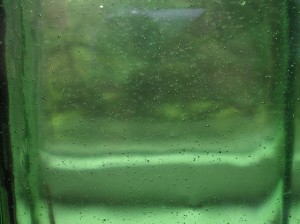 slips through the woods

and a pale silken seed

of a windborne seed

to land where it may

and for now this one

its own milky way

in the gray green light

by Michael M Grymbaum reporting on the New York City Department of Transportation’s collaboration with the artist John Morse to create new visual and poetic signs to advise residents, visitors, pedestrians, cyclists and all motorized street traffic to be careful: Walking, riding and merrily moving along the sidewalk and street is a dangerous undertaking.  Enter the DOT and Artist to warn said traffic in new and clever signage that consists of colorful stick figures and seventeen syllable haiku to be posted at dangerous intersections.

Disclosure first: I am a lover and writer of haiku. Usually not the seventeen syllable/three line form that is mostly taught in grammar school. This format and syllable count is now open to discussion and has been discarded by most progressive and serious haijin (haiku poets).  Therefore upon first glance at the DOT’s attempt to merge haiku and street signs, I was intrigued, somewhat mystified and somewhat pleased at the same time.  After reading the full article and a sampling of the haiku, I am baffled and amazed at this mixed-marriage of lost opportunity.

First and foremost – how are people even in this age of multi-tasking, tweeting, walking/driving supposed to slow down long enough to read a haiku that is in essence telling them not to really do this – not to read, tweet shuffle or do anything that takes their attention away from being fully present.  The haiku become  safety hazards in themselves.  This is crazy.  Does anyone else see the irony in this?

Once again, a good idea on paper but a horror in a real New York minute.

That being said (safety issues first), I can get on to the the real niggle.  The haiku are terrible!  No offense to Mr. Morse (I like your artwork), but these are as far from being real haiku as I am a grafitti artist. For example:

She walks in beauty

And this, in my opinion is the best of the lot.  For those of you who cannot see anything wrong with this – God Bless – ignorance is bliss, and I say this with love in my heart.  For the rest of us Ugh.  Gonna be hard to sleep tonight.

This is the first blog that I have written from a negative standpoint and it saddens me, but truth be told I am very disappointed that once again haiku, such a lovely form of poetry, is so often misunderstood and now so misused.  And to my fellow haijin I express the deepest sympathy.

Lest it be said that I am not a good sport – I decided to pen my own haiku for the NYC DOT (in three lines and seventeen syllables no less):

Thank you for reading/listening to my rant.  END_OF_DOCUMENT_TOKEN_TO_BE_REPLACED