Just read a theatre review in the NYT about a “wistful comedy” in which the female protagonist is described as a “quirky post-hippie in peasant skirts and crocheted panchos”.

Flashback and fast forward. I really had to look hard at myself and sister artists of a certain age. Are we really that much of a cliche (sans accent here)? I know that when I showed up at a surprise hippie-themed party for my 50th birthday (nine years ago), I was told that I was appropriately dressed without even being aware of it. While I think of it as being tres (again no accent over the e) stylish, I have to question it now as a nostalgic throw-back to freer youthful times. Or more honestly, stuck in a rut and not knowing any other way to dress.

The female lead is also described as “a charmer dressed in bohemian chic”. Somehow, I like and relate to this description much better. Who wouldn’t? Boho chic. Romantic and aware. Whimsical and carefree.

Or is it purely out-of-date once-a-hippie always-a-hippie? Does it really matter? Not to this “quirky post-hippie, boho chic, love my blue jeans and always will – just let me wear something comfortable today”. 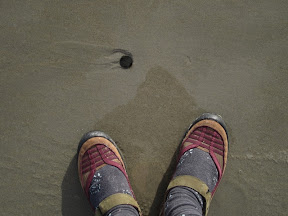 Halloween…
she asks to borrow
my hippie jeans*