It is very difficult to maintain a sense of equilibrium during this novel viral distancing. For me, “social distancing” is widening the cracks in our societal assumptions as well as our physical proximity. I feel proud of our everyday heroes, guilty for not participating more, resigned and hopeful—all in the span of an hour. On any given day, my internal barometer ranges between sunshine and hurricane. This is the new normal for most of us, but especially for empaths.

I think of Peggy at Shop Rite. She is the kindly old grandmother stereotype who womans the register while chatting amiably and not missing a beat in speed bagging and perfect alignment of food groups. I was amazed and grateful for her skill and dedication pre-coronavirus. She actually likes her work and customers too, despite the many challenges of the job. I wonder how she is doing. I have not been grocery shopping for a couple of weeks having stocked my pantry and freezer. I’m not sure I will see her when I do run out of stock or afterward.

I can and do keep the Peggys of the world, as well as our leaders, first responders, friends/family, farm and field close to my heart in conscious gratitude and reverence.

Thought for the day: there is so much to learn. About ourselves, about each other, about our community, about leadership, about common heroes, about grace under pressure.

Take heroes for instance: the typical image (or Hollywood idealized portrayal anyway) has mostly been about individuals with super-human abilities and traits who are able to vanquish monsters and mobs. This model or stereotype is changing, and our realization of true heroism is growing as fast as the virus that spawned it.

We are recognizing neighbors, who are not super human and very much like us in everyday manner and occupation, who are rising to the occasion, sacrificing comfort and substituting courage and honor in place of fear.

That is huge. And it took a long time for me to learn, because it was easier to relegate heroism to outsized individuals who were stronger, smarter and had better abilities than me. Uh, no. It was a lazy excuse to watch instead of participate.

Heroes are not individuals who vanquish fear or know-not fear, but instead work side-by-side with fear, and don’t let fear overwhelm them. They allow fear to walk with them but not ahead of them. This takes work, hard work and it takes heart. Not everyone is capable of this, and I can only judge my own actions.

Today, I am grateful for all the extraordinary-ordinary teachers (heroes) among us, not just for their contributions, but also for their lessons. Angels do walk with us.

“To be in presence rather than results. This is a practice that I can work and play with.”

I wrote these words a year ago today, and I have been “practicing” presence for a year now with generally positive results. At the time, I was speaking/writing of incorporating a life practice rather than forming a resolution as one is want to do at the new year or any new critical venture. Not giving in to worry or fear is difficult, especially at first, however it works with mindfulness i.e. — not getting ahead of yourself. It has served me well on two occasions, the most recent one yesterday, when I went to a cardiologist for a stress test. I had chest pains (think angina) a week earlier. I managed to deal with the episode as well as the in-between time waiting for the test — to be able to compartmentalize the worry and thus walk the dog, paint something exciting (for me), visit with out-of-town friends and family and show up at the doctor’s office ready for any outcome. I did not deny the possibility of test results showing damage and a vastly different course of action, but neither did I dwell on it, or let it ruin time spent enjoying or working through life’s palette. As a visual artist, I have come to appreciate just how much and just how little control I have over the eventual outcome of the end result on the canvas, so I may as well go for whatever I’m doing with verve and nerve. As it turns out, the results are most often not worth the worry if you pay attention as needed. Oh, and the doctor said I have a strong heart, but I already knew that.

the day after
the super moon leaves
a lavender sky 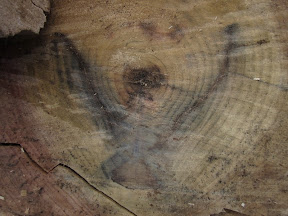 Last evening, after a challenging week, I decided to listen to some local musician friends play and share their songs. Guitars were strummed, drums rapped, conversation hummed and a happy baby was fondled while original music drifted sweetly by. It was a nice antidote to an extremely stressful week and tiring work day. I drove home sleepy yet happy. I was able to shake off the blues by listening to the blues. But not for long.

As I was mellowing with a cup of chamomile tea – THE LOUDEST BOOM to date richochetted through the yard, my kitchen and heart. The vibration was commanding. I knew lightning struck very very close, because it was the second time in ten months to hit within a few hundred feet of where I stood. Needless to say – I was fully and breathlessly AWAKE.

Half the house was lit. I quickly and correctly surmised that fuses blew. It was an easy remedy to bring all the lights back on. However, a burning permeated the air. I checked every area inside and outside the house with my flashlight and nose. Could not find the source but the decrepid odor did not seem to grow. I knew where my pocketbook and dog’s leash were and was ready to evacuate if necessary. Yes, the dog – my big trembling baby, was attached to my leg shivering silently on such a warm night. Sleep was now a long way off until I could be sure that my old farmhouse would not ignite. Finally finally the dog and I fell asleep.

In the morning, the wired box to the electric gate entry into the nursery-farm was blown apart and scattered along the driveway. Fuses blew in the office and sales room but that was all. The eerie burning scent had come from the wires and lingered slightly into morning.

Of course, I began to wonder if it was a sign from the heavens. But for what? Wasn’t it enough that I had a hellish week? And if you are going to send me a sign – please make it clear. A lightning strike could be a symbol for many things including energy trying to ground itself. In the end I decided that it was just another case of lightning striking twice, and wasn’t I lucky to be able to witness and write about it? (?) It certainly helps to put things in perspective – what’s really so bad about a little stress day by day anyway? 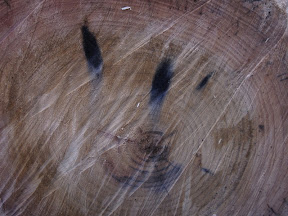 I swear there’s a message in here somewhere for me! The black is the lightning char. 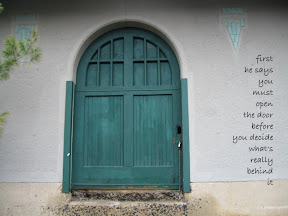